Join the Dekalb County Dems as we honor four Democrats who have given great service to:

Nominations are still open, so please click here to vote for each of the categories above. This is our biggest fundraiser, so make your plans to attend on Sunday, September 25th.

Come and be informed!
Great speakers!
Meet our Candidates!

Book Club of the Month

Join us for the Dekalb Dems bookclub of the month. Each month we will be reading and discussing another book about all sorts of topics. From voting rights to environmental sciences.

Our book selection will be wide and vary from all sorts of topics.

Lets fill our communities with Pritzker Rocks signs! Includes sign and wire frame! All donations go to the DeKalb County Democratic Party to support our efforts for 2022.

You can purchase a single sign for $10 or increments of ten signs for $80!

The DeKalb County Democratic Party finds strength in its community. We are your neighbors, your coworkers, your friends and your family. We will continue to fight for fairness, equality, and opportunity for all. We believe in a society, which has as its guiding principles:

To sustain a society and a vital democracy, citizens must have a living wage. All workers are entitled to fair pay and good working conditions for their labor.

The key to prosperity and the wisest investment we can make for the future in a competitive global economy is education. Quality public education is essential to providing equal opportunity for success. It is critical for the maintenance of a democratic society and to create opportunities for all its citizens.

With climate change in mind, we must promote sustainable environmental policies that protect our future resources, rich farmland and quality of life in DeKalb County.

Our party recognizes the scientific reality of human-caused climate change and the imperative to quickly advance the use of renewable energy sources.

Our party has a long history of supporting justice for all. Racial, ethnic, and cultural diversity is a source of our country’s strength, and a competitive advantage in the global economy.

We therefore enthusiastically support programs, policies and organizations that:

The public safety of our citizens is a basic human right and the responsibility of our government and community.
We therefore enthusiastically support and will work to accomplish these goals:
sane, logical, and adequate regulation of guns, comprehensive background checks, and gun owner liability insurance.

The DeKalb Democratic Party works to protect the votes of all individuals. We believe excessive money in politics has become a threat to our democracy.

We support responsible budgeting through a mix of increased revenue and cost reduction.

MEMBERSHIP: Voting membership in the organization is limited to precinct committeepersons, as described above and members of the Executive Committee, but all Democrats and all other persons interested in the purposes of the Democratic Party, as described below, are encouraged to attend and participate as non-voting members of the organization. The committeepersons present at any meeting may vote to move to a closed session without non-voting members to conduct personnel matters.

PURPOSE: The purpose and objectives of this organization shall be:

The Chair of the DeKalb County Democratic Organization must be an elected precinct committeeperson.

The Communication Chair, Finance Chair, Events Chair and Political Affairs Chair shall be elected at the next regularly scheduled meeting following the Convention of the DeKalb County Democratic Organization. Any of these positions left vacant or becoming vacant after the voting process may then be appointed by a caucus of the Executive Committee.

It is the duty of all Officers of the organization to attend every meeting. Any officer who misses three consecutive meetings without serious cause may be removed and replaced by a caucus of the Executive Committee.

1. Be the official representative of the DeKalb County Democratic Party in absence of Chair.
2. Preside at meetings in the absence of Chair and act for the Chair at that meeting.
3. Assume the Chairmanship in the event the elected Chair cannot perform their duties, until a new Chair is named according to
these bylaws.
4. Serve as a member of the Executive Committee.
5. Assist the Chair with candidate recruitment
6. Perform such other duties as are delegated by the Chair.

1. Record and keep in their custody minutes of all general and Executive Committee meetings of the DeKalb County Democrats.
2. Keep an accurate list of names and contact information of all members and elected Democratic Officeholders.
3. Serve as a member of the Executive Committee.
4. Prepare for their successor a complete set of minutes for the previous two year term to be presented at the first general
meeting presided over by new officers.
5. Keep one set of past minutes available for inspection by any member of the DeKalb County Democrats which must be provided
for inspection within seven days of the request.
6. Provide the Bylaws of this organization for each meeting. The prevailing document shall be these Bylaws.
7. Send out in e-mail form and have hard copy of previous meeting’s minutes for review by five to seven days before the next
regularly scheduled meeting.

1. Pay all bills approved by the Executive Committee.
2. Keep accurate financial records and make itemized financial reports at all general meetings.
3. File Illinois State Board of Elections reports and perform other duties of the office as required by State Law.
4. With Executive Committee, prepare and submit an annual budget for approval by the Central Committee.
5. Prepare for their successor a complete financial report for the previous two year term to be presented at the first general
meeting presided over by new officers.
6. Serve as a member of the Executive Committee.
7. Be the keeper of a ledger or similar financial record of all current, past and projected monetary expenditures of the
DeKalb County Democrats. Said “ledger” shall be available for inspection by any member of the organization which must be
provided for inspection within seven days of the request.

1. Be responsible for external communications, including press releases and media alerts as directed by the Chair.
2. Be responsible for the management of content on the DeKalb County Democrats website.
3. Create for distribution a monthly DeKalb County Democrats Newsletter.
4. Serve as a member of the Executive Committee.
5. Chair the Communication Committee and provide committee reports.
6. Hold, at minimum, quarterly committee meetings.
7. Perform such other duties as are delegated by the Chair.

1. Coordinate and plan all DeKalb County Democratic events.
2. Coordinate and organize volunteers for events, parades and festivals.
3. Organize a list of all upcoming parades and festivals in DeKalb County.
4. Serve as a member of the Executive Committee.
5. Chair the Events Committee and provide committee reports.
6. Hold, at minimum, quarterly committee meetings.
7. Perform such other duties as are delegated by the Chair.

1. Be a liaison between campaigns and the DeKalb County Democratic Organization.
2. Organize all issue advocacy campaigns for the DeKalb County Democrats.
3. Coordinate letters to the editor.
4. Serve as a member of the Executive Committee.
5. Chair the Political Affairs Committee and provide committee reports.
6. Hold, at minimum, quarterly committee meetings.
7. Perform such other duties as are delegated by the Chair.

COUNTY BOARD DISTRICT CHAIRS shall:

1. Consist of the Chair, Vice Chair, Secretary, Treasurer, Communication Chair, Fundraising Chair, Events Chair, Political
Affairs Chair, NIU College Democrats President and Young Democrats of DeKalb County President (NIU and Young Democrats
Presidents do not have voting rights.)
2. Have full charge of the property of the organization, subject to the instructions of the Central Committee.
3. Plan and direct the work necessary to carry out the programs as set by the State Central Committee and the Central
Committee of the DeKalb County Democratic Party.
4. Create and designate such special committees as it may deem necessary.
5. Perform all other duties as specified elsewhere in these bylaws.

1. The rules governing conduct of the general meetings shall be Robert’s Rules of Order as a general guide with these bylaws
being the prevailing document.
2. Date, time and frequency of meeting shall be set by the Executive Board at the beginning of the year.
3. Any change in the established schedule shall be approved by the Executive Committee and communicated to the membership by
the Secretary no later than five days prior to said schedule change.
4. General meetings shall be open to any interested persons unless a vote is taken by the Precinct Committeepersons present to
close the meeting or a portion thereof to the non-committeepersons.
5. Aside from the convention, a motion shall be considered as passed when a simple majority of precinct committeepersons
present vote to support the motion.
6. A quorum shall be deemed to exist at any meeting where a majority of precinct committeepersons are present.

FISCAL PERIOD shall consist of two years beginning 21 days after the Primary at which Precinct Committeeman are elected, as set by the Illinois Compiled Statutes.

AUDIT: At the end of each fiscal period an Auditing Committee as appointed by the outgoing Executive Committee will examine the books of the previous two years before they are passed on to the incoming officers and the general membership.

FINANCIAL PLAN: A financial plan shall be prepared by the incoming officers and presented to the general membership at the first meeting following their election.

If the office of Secretary, Treasurer, or Vice Chair becomes vacant, the Chairman will appoint a person to that office in compliance with Illinois Compiled Statutes.

Any executive committee member shall be removed from Office if impeached and convicted for moral turpitude, and/or failure to perform their duties satisfactorily as determined by voting members. Impeachment proceedings shall take place over two regularly scheduled meetings as follows:

1. A petition for impeachment must contain the signatures of at least two-thirds of the DeKalb County Democratic Central Committee that were either elected or appointed. The petitions shall be submitted and the rules for the proceedings shall be set by Central Committee members present at that meeting. If the Chair is the officer subject to impeachment, the Chair’s power of appointment of Precinct Committeepersons is suspended until proceedings are concluded.

2. The officer shall be removed from office convicted on a vote by a two-thirds of committee persons present at the impeachment meeting. Should the Chair be the officer subject to impeachment, that meeting shall be chaired by the Secretary. The officer being Impeached is provided the right to defend themselves to the voting members.

AMENDMENTS to these bylaws may be passed by two-thirds of the voting members present at a general meeting provided that amendments were submitted to the general membership in writing at least one month prior to the meeting.

Please allow 48 hours for a response. 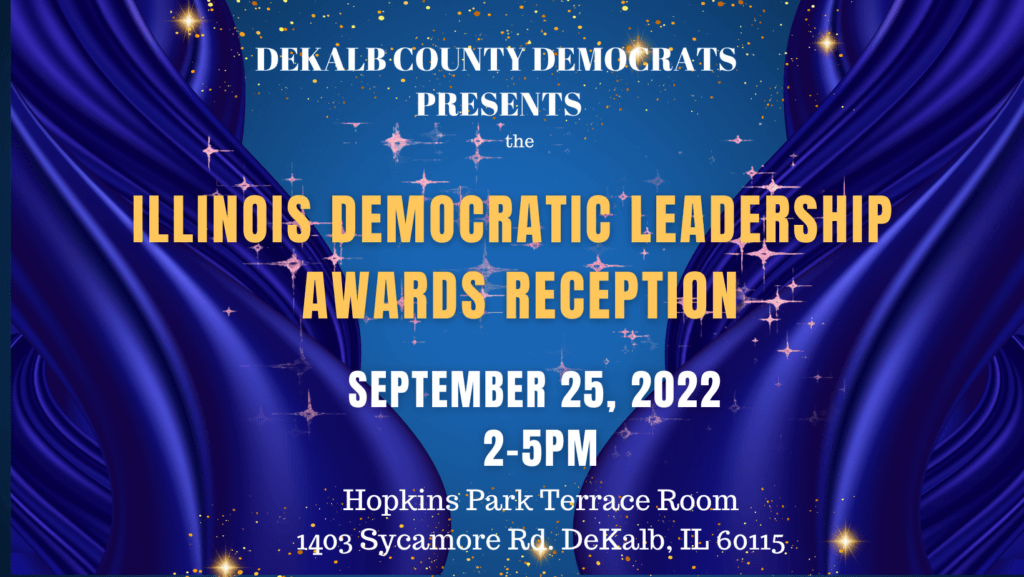